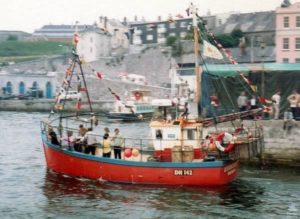 The story of the real boat
Exuberent is not a misspelling, it is spelt this way because when the owner of the actual boat registered it there was already a vessel on Lloyds Register of Ships with that name, therefore it was differenced to comply!

She was a Cygnus Garry Mitchell design 32 foot displacement hull work boat which were fitted out as fishing vessels, angling boats, pleasure craft and even ferries. Exuberent was fitted out as a South Devon Channel Crab fishing vessel to work the inshore and mid channel waters off the south coast. Her hull was built in the winter of 1979/80 in Newlyn, Cornwall and was fitted out in Dartmouth in the spring of 1980 and commissioned later that summer. She successfully, laid and hauled crab pots off Dartmouth for the rest of that year and the next and topped the charts for landing of brown crab and lobster for her class in 1981 with a crew of three. I the winter of 1981 it was decided to move her and her fishing gear to the “Over falls” off Weymouth in Dorset as fishing was rich there at that time of the year, this is when I joined the crew on a part time basis to cover for rest periods and “watches”. After a successful season, she was moved back to Dartmouth for the 1982 spring/summer fishing in home waters. Again, in October of 82 she was off to work the waters off Weymouth for another successful season.

On 12th March 1983 she was being brought back to Dartmouth by the” Skipper” alone as the crew moved all the boats husbandry back to Dartmouth by road. What happened next will never be known exactly. The boat was overdue in Dartmouth and the alarm was sounded. Search and Rescue helicopters and fishermen in their boats combed the areas off Chesil Beach, Portland Race and the south coast but to no avail. Exuberent and her “Skipper” were pronounced lost, presumed dead two days later. She was a lively and pretty little boat and would have gone on to be even more successful in her class within the South Devon Crab Fishing Association.

Here is the crew on the boat at the end of Weymouth Trawler Race in May 1982. Yours truly is wearing the red T shirt on the left. 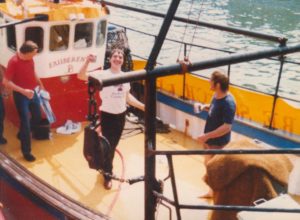 I am building this boat with the scale hull I bought off Cygnus at that time to put in our local pub but when the accident happened I lost heart in it. But now, because I have moved to Somerset and joined the Sedgemoor Model Boat Club, I have found new enthusiasm to finish the Job. I hope you like her! 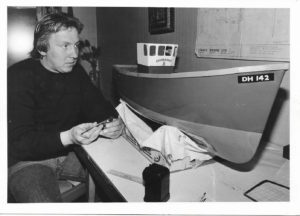 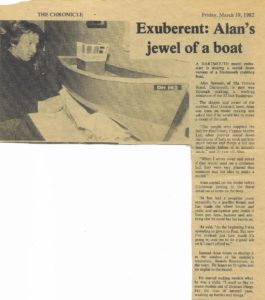 I started this as a static model in 1982!!! Note the photos of a younger Alan taken by the Dartmouth Chronicle. I stripped out the deck I originally installed and started all over again!

No, the wheelhouse is not floating in thin air, it’s balancing on a transparent ruler mocked up to ascertain where deck beams will be sited! Motor, shaft and rudder box fitted courtesy of Russ, deck shelf in. I then fitted deck beams and formed access hatches for electrics and cut and fitted ply deck boards. Then came the siting and fitting of the wheelhouse/hatch and deck hatch. Deck boards primed and painted it was time for something I had never attempted before, soldering!

I built a jig to take the gunwale railings and proceeded to fabricate them and the ‘A’ frame out of brass rod and pipe respectively, although a complete novice, I was very happy with the result I achieved using Russ Chilcott’s father’s old soldering iron which I bought at a club auction! Then came the stern cage used for carrying fish boxes, on the actual vessel this was made of heavy gauge box steel and to replicate that in soldered brass would have been impractical because on the stern of the model it was vulnerable to damage so I fashioned this out of a polypropylene drip mat from a pub draining board, I defy anyone to recognise it!

The mizzen mast and its sail (courtesy of her in doors!) was stepped through the aft wheelhouse roof, through the deck and located into a stepping point in the keel. Then came all the detail to the wheel house roof, exhaust, chimney, vents, radar (a Nivea hand cream container), search light, liferaft, mast stays, lifting derrick and mizzen halyards with dressed ship overall pennants. On the forward deck is sited the accommodation hatch and the Spencer Carter 1 ½ ton hydraulic slave made out of a jewellery box and two large back to back overcoat buttons, among other things!

I finally finished the model in June 2018, 36 years after I started to build her!!! On June 21st, a glorious summer’s day, I finally launched her at Apex Park Lake, home to Sedgemoor Model Boat Club, who gave me the inspiration to complete the build.
She performed well and I was elated at the way she sat in the water and the way she moved water in her wake as it was very characteristic of the actual vessel and the way she moved. You will notice that there are no crew on deck and no deck clutter as they are only used for static display purposes but the Skipper is sat at the helm in the wheelhouse on his own as he was.
Nothing in the model boating world seems to go smoothly to me and when removing the model from my car for the launch the dressed ship pennants caught on the boot lid and this broke the antenna to which they were attached to! So, no flags I am afraid. I replaced them later for another day.

I enjoyed every aspect of building this boat and learned a great deal in the process from other members of the club. I have now got the bug and have three other models under construction, I hope it doesn’t take me as long to complete these!!!

May I dedicate this build to my friend and “Skipper” the late Paul John Goddard.

Photo; Paul and the memorial plaque which is on Bayards Cove in Dartmouth. 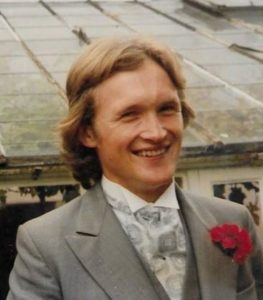 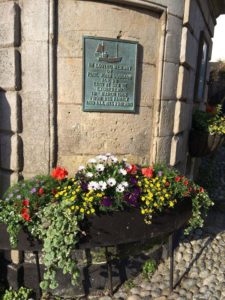