The 2020 series is go!
Round 1 – Weds 26th Feb results > Club 500 Series Rd1 2020 scores
This was the opening round of the 2020 series and the first time out racing with lipo batteries. The extra speed combined with very choppy waters made the boats handling a bit more tricky for all with several making small errors that cost them lots of places.

After a fairly poor start Dave suddenly got into the “grove” going on to win 3 races, he won this round by quite a margin. Richard had his share of bad luck; being capsized on his very first lap of Race 1 and then again in Race 6 on the very last lap just a few yards from the finish line! Kevin and Russ had their issues with water and connection problems, while Howard kept it going nicely picking up the pieces/points. Overall the switch to lipos was a great success, most will have used less than 50% of their battery capacity.
6 races down and another 42 more to go!

Hopefully we will see Ian racing with us soon and maybe Alan as well?
7 boats racing at once should be fun – I can’t wait!

For obvious reasons our 2020 series soon came to a halt by late March! Even though only one round had been run for the 2020 series it was agreed Dave Behennah should be awarded the series trophy.

Drivers and boats at the opening round in 2019 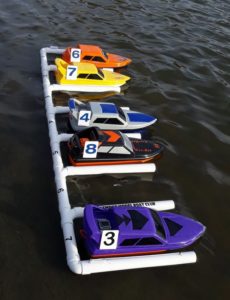 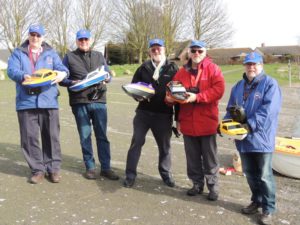 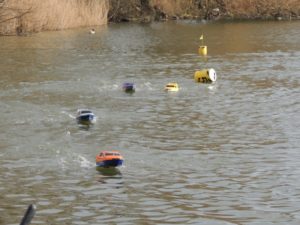