No summer competition meetings so far in 2020 due to Covid-19 but members are still using the lake for causal boating and a bit of “serious testing!”.
A few short videos of the FE session is now on the Club’s Youtube channel;SMBC Youtube channel 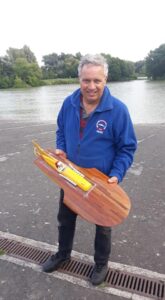 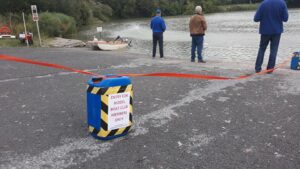 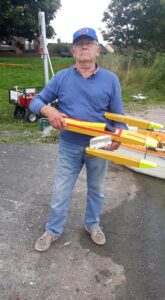 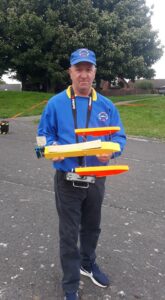 Winter Series round 5 (8th March) & FINAL overall points table > FE Winter Series Rd5 & FINAL standings 2019-20
This was the 5th and final round of the Winter Series and the conditions were pretty much identical to the previous round with strong and gusting westerly winds making the far side of the course very choppy. Russ won the Mini Mono RTR class, he had already won the series for this class and finishes on 162 points. Dave took 2nd place which meant he keeps hold of runners-up place in the series on 138 just ahead of 3rd place Kevin (133) with Chris (132) and Mark Shipman (129) taking 4th and 5th respectively .

Russ also won the Mini Hydro class which was enough to secure the class series overall on 157 points. Bob finished in 4th at this round but keeps runners-up place in the series on 149, while the 2018/19 series winner Chris had to settle for 3rd on 141.

The Hydro class has been well supported this series so plans are underway to race them during the Weds night series as well!

Winter Series round 4 (23rd Feb) results & race reports > FE Winter Series Rd4 2019-20 results
Originally this round was supposed to be on 9th Feb but a massive storm meant it was rescheduled. We still had very strong winds and choppy waters for this one but at least it stayed dry. The conditions made things “fun” at times for these little boats! We had 7 in Mini Mono and 5 in Mini Hydro and when we could keep them going in a straight line the racing was action packed and very close at times.
Russ won Mini Mono RTR. Chris, Bob and Russ all tied on 36 points in Mini Hydro.
The 5th and final round of the Winter Series is now only 2 weeks away on 5th March.

Winter Series round 3 (12th Jan 2020) results & race reports > FE Winter Series Rd3 2019-20 results
We had 8 boats in Mini Mono RTR plus 6 others in Mini Hydro and all enjoyed some great racing, in good weather but slightly cold. As usual there was some entertaining moments and a few little brushes with the marker buoys!
Kevin and Russ tied in 1st in Mini Mono RTR. Russ won Mini Hydro racing Arley’s old boat.

Winter Series round 2 (1st Dec) results & reports > FE Winter Series Rd2 2019-20 results
Once again we had 8 in Mini Mono RTR and 5 in Mini Hydro class on a perfect day for FE racing with just a light breeze – though it was very cold! As usual the racing very close for the mono class boats with just 57 seconds between 1st and 4th places in one race.
Bob won the Mini Hydro class for this round, while Russ the Mini Mono RTR class.  See score sheet for full reports.

Winter Series round 1 (3rd Nov) results & reports > FE Winter Series Rd1 2019-20 results
We had 8 entries for the Mini Mono RTR class and 5 for Mini Hydro class for the opening round of the 2019/20 series on a perfect day for FE racing. The racing was very good and especially close in the mono class with only 1 second separating the top 3 in one race!
For this round overall Dave won the Mini Mono RTR class and Chris the Mini Hydro but its only 1 of a 5 round series so there is a long way to go yet! See score sheet for a full report.

Winter Series round 6 (31st Mar) results & reports > FE Rd6 31st Mar & FINAL overall points tables
We had a good entry with 8 in Club Class and 4 in Mini Hydro for the final round of the winter series. The racing was entertaining as usual with many spills and thrills plus some very close races results. The meeting highlight was junior member Tom nicking 3rd place from his grandad Richard by just 3 seconds! Russ won both Club Class and Mini Hydro.

Winter Series round 5 (24th Feb) results & report > FE Rd5 24th Feb 2019
For round 5 of the series we had 7 entering in Club Class and another 3 in Mini Hydro. The racing drew a large crowd of onlookers enjoying a lovely sunny day in the park. Russ won a race in Club Class and Chris one in Mini Hydro which with one round still to go is enough for them to win their classes in the overall series.
Congratulations to Russ the 2018/19 Club Class Winter Series winner and Chris the Mini Hydro class winner.

Winter Series round 4 (27th Jan) score sheet & report > FE Rd4 27th Jan 2019
It was windy, very, very windy! The water was so choppy the racing was reduced to a slow crawl just trying to keep the boats under control or avoid getting flipped over. After 1 race for both classes all agreed to give up and go home! Dave Lowther won Club Class, Russ Chilcott the Mini Hydro – but everyone was beaten by the gale force winds!

Winter Series round 3 (30th Dec) score sheet & reports > here
Numbers were down a little but still had a good afternoon with lots of close racing in both classes through all the heats. Mini Hydro is still as much about finishing the race and avoiding hitting the markers or each other as going the fastest! See score sheet for full reports.

Winter Series round 2 (2nd Dec) results > FE Rd2 2nd Dec 2018
There was plenty of good races in both the Club and Mini Hydro classes on a cool and blustery afternoon. Chris Locke came out on top winning both races in both classes! He looks like the one to beat this series. For a full report see the score sheets.

Winter Series round 1 (4th Nov) results > FE Rd1 4th Nov 2018
After a very long break not being able to run any fast electric boats due the algae outbreak we finally got a chance to go racing again! 6 entering the Club Class and 4 in the Mini Hydro class for the opening round of the 2018/19 winter Series. See results sheet for full meeting report.