This meeting was for the Alice Trophy as well as round 1 of the Spring Series – not that it felt much like spring as it was cold and wet – very wet! There was a light westerly breeze which came and went from time to time but the rain stayed pretty constant all morning. 7 skippers entered this one, that soon dropped to 6 as Graham had radio problems. We raced a triangle/sausage course with a gate at the leeward end and finish using the windward mark. This made for a nice long race with several opportunities to gain places and had it not been quite so wet it would have been very enjoyable.

Each skipper took it in turn to be the RO but after 7 races with the wind dying and everyone soaked through we agreed to call it quits. We didn’t know it at the time but the last race between Nigel, John and Richard would decide who won this round and the trophy. Nigel won the race with John just ahead of Richard crossing the line. This result gave Nigel the trophy and round win scoring 9 points, with John and Richard tied on 10 but John takes 2nd place on count-back.

Well done Nigel, he gets to keep the Alice Trophy for another year. 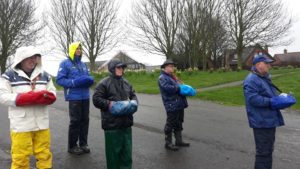 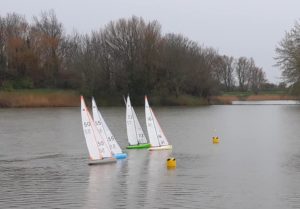 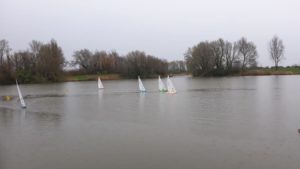 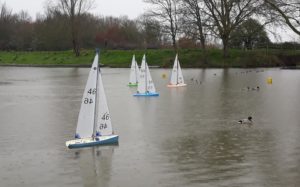