7 skippers entered the event, Richard turned up without his boat but kindly offered to be the RO so we could all stay on the water and race as one fleet. We put out a triangle/sausage course on a completely flat calm lake in the hope the wind would make an appearance. After the first very long and painfully slow “race/drift” Scott called for an early coffee break in the hope things would improve – and they did – very slightly! At least enough to keep the fleet moving along so we could complete 8 races and to everyone’s surprise it didn’t rain.

Nigel was right in the grove from start to finish as he sailed away to win 7 of the 8 races, in one having had to do two penalty turns he was dead last after the triangle leg but somehow still managed to come through the fleet and win it! Scott and my quick lakeside maths wasn’t quite right at the time and it turned out 2nd to 4th places were much closer than we thought and not in the right order. Ron took 2nd place on 16, John W 3rd on 17 and Scott 4th on 18. I know

Congratulations to Nigel on win.

A big thank you to Richard for being the RO and collecting the markers in at the end. 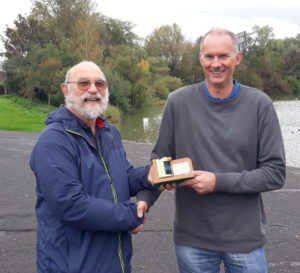