No competitions in 2020 due to Covid-19 but members are still using the lake for Causal boating meetings;
Scale & “other” boats at the lake. Half a dozen members enjoyed a very pleasant evening last night (Weds 22nd July) with a variety of models on the water, including some 3D printed and one powered by a solar panel!
Thanks to Daron & Mark for the photos; 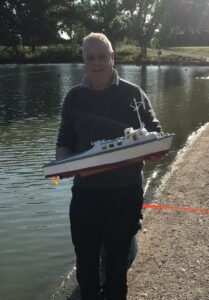 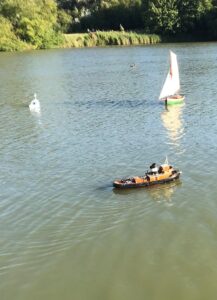 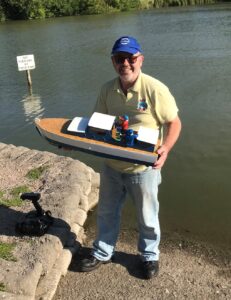 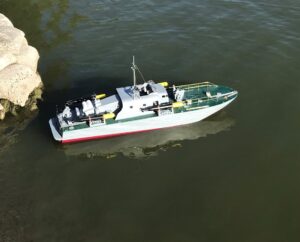 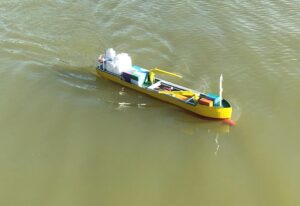 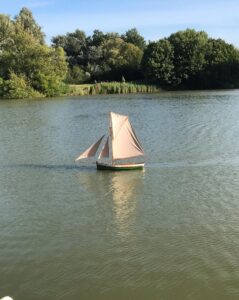 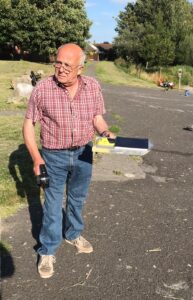 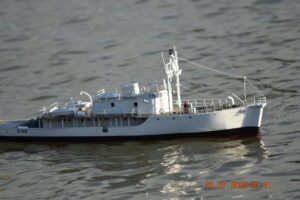 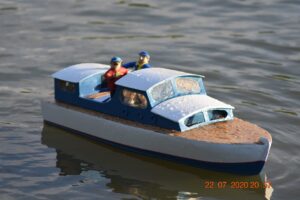 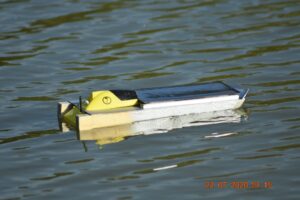 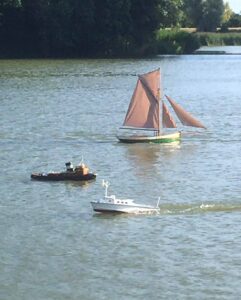 Blind Steering (14th Aug) results & FINAL overall points table > Rd7 Blind Steering & FINAL overall points table 2019
It was again a disappointing turn out for the last evening of the summer series in the scale challenge. Four members were present for the last evening. The last event was the blind steering round, myself and Russell were paired and Chris and Darren made the other pair. It was accompanied by the usual mayhem of left and right becoming muddled. I had the worst round of the night and Russell the best.
The points were shared equally amongst the teams, due mainly to the lack of competitors. The series overall winner was Russell and myself coming second and Chris Locke Third. The day did see some free boating taking place by members in the late afternoon and early evening.
Rob A.

Payload Race (24th July) results & overall table > RND 6 Payload Chal 24 07 19
Round 6 of the scale challenge saw the 2nd payload challenge event of the year. Five competitors entered with myself being the lap counter and adjudicator. Keith had problems from the start with battery issues which postponed the start. Just as we were starting he again had issues with his boat. It was agreed we would start, so the hour long challenge started. Keith started about 4 minutes in to the event and went well and 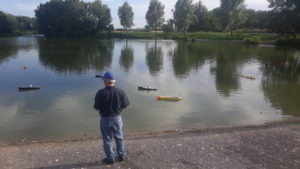 had no more issues. Dave had problems just after the start and failed to complete one lap. Russell was his chirpy self and went well but ran out of battery 52 minutes in. Chris had problems 5 minutes in with a blown speed controller, and then had more issues 20 minutes in, with receiver problems and then more speed controller issues a little later, the boat failed at 53 minutes. The only boat that went the full distance with no issues and plenty of battery was Bob Bryant. The boats throughout the challenge were plagued by picking up feathers and other debris around the propellers.

Scale Steering (3rd July) results & overall points table > RND 5 Scale Steering 3 7 19
It was a nice evening with plenty of sunshine for the years scale challenge event. Two docking areas were created using the new push together pipe system, one a turning area and the other a dock which required the boat to drive in and a bit of reversing in to the adjoining dock. The rest of the course consisted of the usual obstacles. The evening saw the usual emergent of the smaller boats which should give the competitor an advantage, Keith had his tug which was the widest boat. Bob’s tug managed to knock the docks apart, a quick fix was soon done. Scoring around the obstacle was generally low, with most of the points being scored in the dock areas. 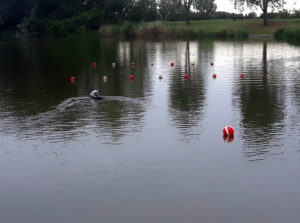 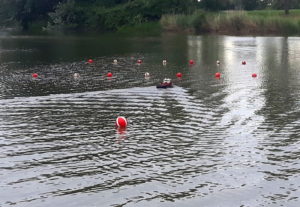 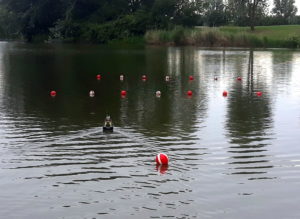 Eight members were present for round 4 of the scale challange, it was a dull but dry evening with only a few spots of rain, with hardly any wind. This should have made the challange easier but most members had low scores for the conditions. Members were setting boats to run straight away from the course, but the course seemed to have a jinx as most boats veered of to the right after leaving the start gate. The honours of the night went to Russell and Chris.
Straight run results >RND 4 Straght Running 12 6 19 (1)
overall points table > scale challange table after 4 Rds 2019 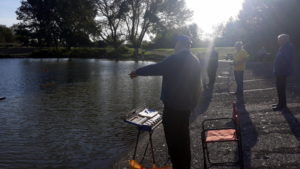 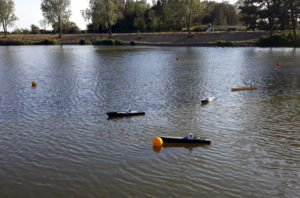 There was a poor turn out for the 3rd round of the scale challenge with only 4 members present to compete. So 4 members boats started with Russell putting in a couple of quick laps to get a two lap lead and then just driving around with the rest of the fleet. Keith retired with an expired battery after 46 minutes, the three other boats went on to complete the hour. The honours of the night went to Russell followed closely by Chris and Bob.
Payload results > RND 3 Payload Chal 22 05 19
overall points table > scale challange table after 3 Rds 2019

Predicted Log – 1st May
The second evening of the scale challange saw a few more modellers at the lake, a total of seven competitors. There were a few members just spectating. Members were present a bit earlier in the evening doing a bit of free sailing. A course was put out for the predicted log competition with the aid of the buoy laying and recovery boat. After much debate about the rules, and Russell having one of his worst nights in the scale series. The honours of the night went jointly to myself Rob Arlett and Daron Maynard since the times are round down, with Russell in last place.
The next event in three weeks time is the first payload challenge.
Predicted Log results > RND 2 predicted log 1 5 19
Overall points table > scale challange table after 2 Rds 2019

Range Test – 10th April 2019
It was a nice sunny spring evening for the first round of the 2019 scale challenge series which kicks off the Wednesday evening events. Five members turned up, 4 competitors who had 3 boats between them. The scheduled event was the range test, a quick and simple course to put out, as the evenings are still quite short. Even though we had only 4 competitors after two goes each, we only just got done before the sun set. 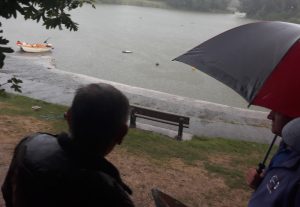 Straight Run – 8th August
The final night of the scale challenge was to be straight running. this Turned out to be quite fortunate as shortly after the course had been set out and the first few competitors had done their first run, the heavens opened for about half an hour or so. The rain was torrential, we haven’t seen rain like that for months!
Nine members were present, Arley Bushill took the honours in the first round with a nearly perfect 13, however Chris Locke took the second round with a perfect 14 score.
Russ Chilcott takes the overall series followed by Chris in 2nd and myself (Rob Arlett) in 3rd place.

Payload Race – 18th July
This was the second payload challenge event of the year. This was not as eventful as the first  with all boats starting and four boats lasting the hour. Russ, Chris, Steve and Rob B were the four boats to go the distance out of the eight competitors that took part. The honour of the night went to Russell who completed 52 laps, two ahead of Chris. We then heard about it all night!
Payload 2 results > RND 6 Payload Chal 18 07 18
Overall points table after 6 rounds > Scale Challenge overall table 2018 after 6 rounds

Scale Steering – 27th June
It was another hot and sunny evening at the lake for the scale steering event. It was decided that as it was a nice evening and high summer so all 10 obstacles would be put out along with Malcolm’s Dog House. The course was then drawn and posted on the lake side board for easy viewing. 10 members were present for the event one had to borrow a boat and Malcolm used mine as his tug boat developed a lake side fault, he did not get on to well with the boat. Each competitor went around the course twice with the members not on the course taking it in turns to score.
Dare I say but the honours of the night went to Russell
Scale Steering results > RND 5 Scale Steering 26 6 18
Overall points table after 5 rounds > scale challenge overall table after 5 rounds 2018 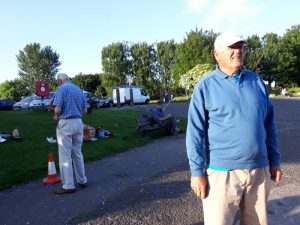 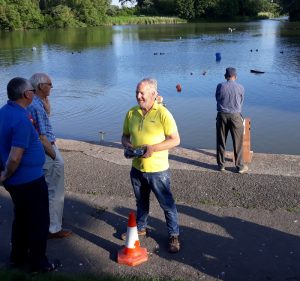 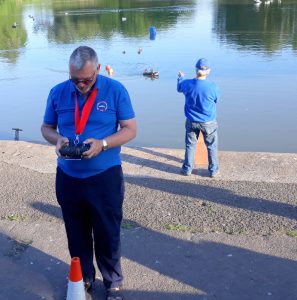 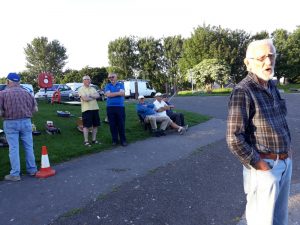 Round four of the scale challenge series was the blind steering event, which always gives great amusement and laughter could be heard echoing around Apex Lake. 12 members participated giving 6 teams. Thanks must go to Dave Lowther for standing for Rod Butler who was expected at the lake but was kept late at work.
The teams were selected by an App on Russell’s phone. Myself and Russell done a quick test of the circuit and done it in about 3 minutes, so we thought that was fine.

So the first team of Arley and Chris took to the water, with Arley calling, it did not take long for the usual mixing up of left and right to take hold. Both caller and controller getting it wrong giving good entertainment to the onlookers. Nearly 13 minutes later they finished, so much for the 3 minutes! Things did not get any better with the second team of Kevin and Bob Bryant who had to be sadly stopped after 15 minutes on the third obstacle, or we would still be there now. The remaining teams did complete the first round in more reasonable times (see results).

The second round saw the callers and controllers swap around, the completion times were a lot more reasonable, the entertainer of this round was Malcolm who could just not get his left and right correct, so did take a while to get through the first obstacle. This evening was very enjoyable for club members and the watching public. The honour of the night went to Steve Coles and myself.
Blind Steer results > Rd4 blind steering
Overall points table > overall table after 4 rounds

1 Hour Payload – 16th May
The evening for the 1st of the payload challenge endure event saw a nice sunny evening with a variable light breeze. There were six entrants with Arley arriving early to try out his just finished challenge boat. The honours of the night went to Chris locke, finishing only slightly ahead of Bob Bryant. Steve Coles finished 3rd, with the first 3 going the full one hour, Malcolm’s boat finished 4th expiring 10 minutes from the end. Sadly for Arley his boat did not start, a bit too finely engineered, still 9 weeks to get it sorted and perfected for the next event. Russell had the usual pre event gibberish and as a result ended up providing the comedy of the night. His boat  provided to be a little temperamental through out the event, with Russell jumping in and out of the rescue boat to retrieve his boat. His boat managed 9 laps and finished 5th and last. Russell complete about two laps in the rescue boat, no points for that!
Payload results > RND 3 Payload Chal 16 05 18 (1)
Overall scores after 3 rounds > scale challenge overall scores after 3 rounds 2018 (2)

Predicted Log – 25th April
It was a good turn out for the 2nd round of the scale challenge competition, weather was fair with quite a strong cool breeze. This round was a predicted log event. The honours of the night went to Kevin Roberts closely followed by Keith and Arley. Fourteen boaters participated with several others there to free sail and spectate.
Rob A.

Range Test – 4th April
Round 1 of the Scale Challenge was a Range Test.  This involves driving through a set of buoys at some distance away.  There were some good scores all round and eleven entries meant a few extra penalty points resulted in a drop of several places.
Russ and Mike tied for first place with 39 points and Malcolm is in third place on 32 points.