No summer competition meetings so far in 2020 due to Covid-19 but members are still using the lake for causal sailing plus the odd “fun” race or two! 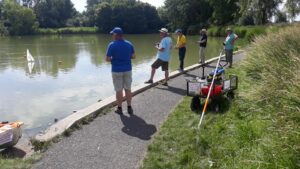 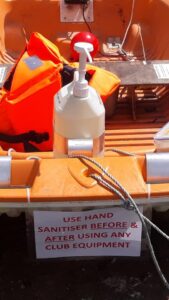 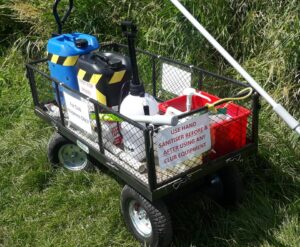 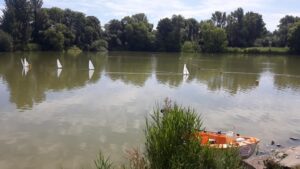 SYS round 2 Sunday 8th March 2020
results > SYS 2020 round 2
We had bright sunshine and a decent breeze to start round 2 of the series. A few of the regular skippers were absent, so we only had 11 skippers for this one. The course was set on the right side of the lake with a testing first leg into the breeze. The segregated start has certainly helped the RTR skippers allowing them to have their own class tussles without the worry of the MC fleet.

John (60) took a clear lead with him to coffee with Mike (22) close behind. In MC, Kevin (88) had a slender lead over Chris (43) with Russ (7) not far behind. This class has certainly been more competitive this year with no skipper dominating the fleet. Poor Alan (9) had another disaster with his boat with more mechanical problems.
During coffee, the course was moved completely to the ramp side of the lake as the breeze was now much stronger and had turned through 90 deg (much to my regret as it turned out)! John (60) continued to dominate the RTR and won the last 4 races. Kevin (88) just couldn’t get to grips with the starts after the course change and fell out of contention with Russ (7) squeezing past Chris (43). Then the wind increased dramatically, which caused the boats to be over-powered especially the MC fleet and the weather turned nasty (rain, bitterly cold wind & hail).
We ended race 9 and decided to end the round early. Well done to Russ and John, winners for this round.

The next meeting is on 12th April. The Sport Yacht Racing (SYR) district races for small yachts start at Warminster on the 29th March (register 9:30am). Details can be viewed on their website.

Round one of this year’s series did not disappoint, we had the weather, 15 skippers and the promise of some close racing. The course was set as a triangle with an extended last leg to the finish close to the ramp.

This year the two classes start at different times and judging from the fleet results, the new procedure seems to have worked, allowing for the RTR to have their own separate battle to the windward buoy.

Mike (22) in RTR, started really well winning three of the first four races. By coffee, he had a clear lead over the other skippers. Unfortunately for him, the course was moved 20m to a more central position and Mike failed to emulate his early results. The last few races belonged to John (60) who nudged ahead and then extended his lead. There was notably wins for Dave (28) & Robert (53). We also had a welcome return to racing for John Betty (181) and a new skipper Graham Small (B).

In MC, Russ was the skipper to beat and always seemed to be in the right place, he won all but two races. Kevin (88) had a consistent run of seconds. Alan (9) had mechanical problems and retired. Jan (184) and Tony (185) also made a welcome return to racing after a long break.

Well done to Russ and John for winning their class this time.

The next SYS meet is the Endurance race on Sunday 16th February 11:00am start.