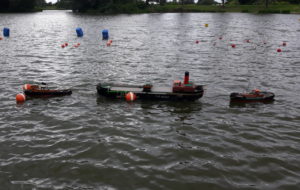 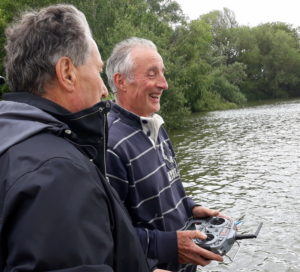 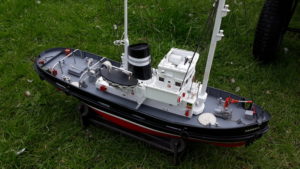 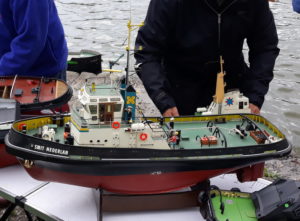 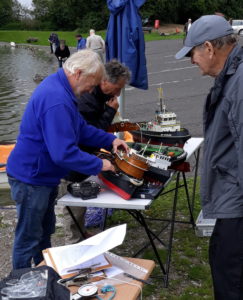 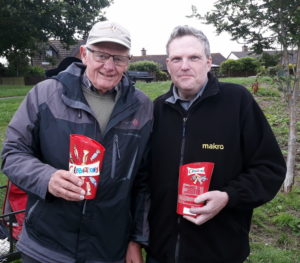 Following the success of last year’s event we held another one-off Open Tug Towing competition but this year the weather not on our side! Very high winds coming straight into the corner of the lake we were using made just setting the obstacle course out onto the lake pretty tricky.
The skippers found steering the course with their tug boats while towing a 6ft long tanker pretty tricky as well! We were joined by members from Woodspring and Shepton Mallet MBC, 8 in total making up 4 teams who braved the conditions which included the odd light rain shower!

Last year’s winners Tony and Maurice from the Shepton Mallet club went first but found the choppy waters very difficult and scored 48 penalty points in their first run and then failed to finish their second run as one tug started to fill with water! The maximum penalty for the remaining obstacles brought their score up to a massive 136 points altogether. Local members Chris and Arley did much better scoring 32 on their first run and improved to score 19 on the second run, giving them 49 points in total. Also from Sedgemoor MBC Russ was first joined by fellow club member Mike for his first run and then Cliff from the Woodspring club for his second run at the course. They scored 32 and then as best of the day 16 giving them a total of 48 points. Geoff who is new to the Sedgemoor club joined Cliff to make up a 4th team. Both had never done tug towing before and with some helpful directions from Chris they somehow managed to score 25 and then 23 points. Their combined total of 48 meant they tied for first place but since it was their first ever attempt at tug towing they were rightly awarded the win and the presented a box of chocolates each for their efforts.

Somehow despite the pretty awful weather (it was mid-June!) everyone seemed to enjoy the event. Lucky Chris’s quick action in the rescue boat saved Maurice’s tug from sinking – hopefully it all dries out ok and we see it and him again next year.

Fingers crossed the weather is much more like summer next time!