Course; triangle/sausage with a leeward gate, start and finish on the same line. Skippers raced off the ramp and then moved to the west bank.

Entries; 7 (all raced together, taking turns to watch start line)

Summary; This meeting was for the Alice Trophy as well as counting for round 1 of the summer series. We started with a very light easterly breeze so were racing from the ramp side. The windward marker was a little tricky at times but there just enough breeze to get around it ok. During the coffee break the wind swung almost a full 90 degrees and was now coming from the south so the entire course had to be moved! This was not a bad thing as the wind also increased in strength and meant the suns reflection off the water was no longer an issue.

As usual Nigel racing his No55 boat was near the front most of the time, with myself and Scott giving him a few good races and nicking a couple of wins on occasions. Later in the morning Rod and then Daron got away from the fleet and picked up a race win each. Unfortunately, just after his win in Race 8 Rod’s rudder servo failed and he had to RTD. He kindly stayed on and acted as RO for the remaining races.
There were sudden wind shifts, especially later in the morning which were difficult to read at times but it did produce some good battles with places changing hands just feet from the finish line!

Nigel was always the one to catch and only had 2 “poor” races which were discarded. He finished the meeting with 5 wins from the 11 races and won with a score of 14 points. Scott picked up 2nd place on 20 with myself 3rd on 25.

Congratulations to Nigel on winning this round and the Alice Trophy (once again!)
below left Nigel collecting the trophy from Scott 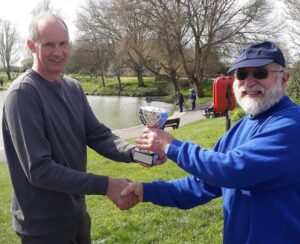