all reports & scores by Russ Chilcott

Spring Series round 3 (20th June) score sheet > IOM Spring Series Rd3 2021
There was a very light northerly breeze coming across the car park, so we sailed from the lower pathway on the west side of the lake. The meeting OOD Scott set his usual triangle/sausage with a leeward end gate – he has promised to do something a bit different next time!

Once again, we had 10 skippers entering so there were 2 and at times 3 off the water as RO’s, all drawn randomly from a rather neat app on my phone. As usual the starts were all important, on the odd occasion the sudden light wind shift meant a boat or two could slip through the line and get away on a port tack. A few skippers found the wind by taking the much longer route going across the far east side of the lake which sometimes paid off big time – and sometimes it really did not!

Nigel had a very good run making the most of the tricky conditions he won Race 3, was RO for Race 4, then had a hat-trick of wins in Race 5, 6 and 7. This was enough for him to secure top spot for this round scoring 12 points (after discards). Bob was the best of the rest finishing 2nd on 17 with Daron having one of his best mornings for while taking 3rd spot on 19. John, Scott and Ron were all tied for 4th on 22pts but on countback it was the number of wins that separated them; John takes 4th (2 wins), Scott 5th (1 win) and Ron 6th (0 wins). Despite the really light winds we managed to complete 9 long races starting the last one just 1 minute before our 12pm deadline!

Well done to Nigel for winning this one. Once a round discard is taken into account (comes into effect from round 4) the overall series has really closed up now.

Weds Night Series round 2 (9th June) results > IOM Rd2 Weds Night Series 2021
We’ve had a run of IOM meetings with a pretty decent breeze staying with us though all our races but tonight it was a return to “service as normal”! Things started off ok with a light westerly wind, it swung slightly so it was coming from the north/west corner but at the same time dropped away to little more than the odd “puff” – and if you boat happened to catch that puff it was great while it lasted!
We raced a triangle/sausage course with the usual leeward gate and windward finish line set out from the ramp side. 8 skippers entered this one, so 1 was off each race as RO. For the last two races the very unpopular and becalmed far side No2 marker (making the triangle) was dropped, instead we raced twice around the other markers making for a sausage course keeping parallel to the ramp were the little breeze left could be found. Many found themselves racing up and down the fleet, sometimes while on the same leg of the course! In fact all the skippers had at least 2 races finishing down in 5th or worst places!

Finding the best line more often than most was Nigel who won this one scoring 14 points. Richard and Ron tied on 17 but Richard takes the 2nd place on countback – 2 wins to 1. There was also a tie for 4th between me and Bob (21), but Bob nicks it on countback after going all the way to compare our 4th places – OUCH!
Well done Nigel.

Spring Series round 2 (6th June) results > IOM Spring Series Rd2 2021
We raced a long triangle/sausage course with the gate at the leeward end and the finish line right up at the windward mark. There was a light westerly breeze which remained fairly constant (by Apex standards!) all morning. The forecast of rain never materialized, in fact after 10 races we finished in bright sunshine. We had 10 skippers entering this one, so 2 were drawn to be off each race to act as RO’s.

Somehow I just about managed to win it! I scored 12 points, Richard and Nigel tied on 13 but Richard takes 2nd place on countback as he had 3 wins to Nigel’s 2.

We had very strong SW winds which stayed with us all morning, occasionally it gusted and was over-powering the A rigs at times. The course was a long triangle/sausage with a gate at the leeward end and the finish line was up at the windward marker. The long course and sudden gusts plus the usual Apex wind shifts gave everyone lots of opportunities to gain, or in my case, loose plenty of places!
We had a 15 min coffee break, had to slightly over-run the 12pm finish time so everyone had done an equal number of RO duties but we did manage to miss any proper rain with only a light shower as we packed up. 14 races were completed with 6 of the 7 skippers winning at least 1 each.

“Mr Consistency” Richard Aucott as usual was always near the front end and with a score (after discards) of 17 points he won this round plus the Alice Trophy. John took 2nd place on 20, with Scott 3rd on 22. 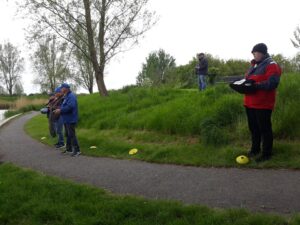 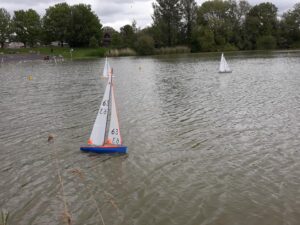 WE ARE BACK! Starting from Sunday 23rd May 2021 competitive racing resumes – see 2021 Calendar page for details.

A few skippers “free sailing” under the Rule of 6 during late summer 2020. 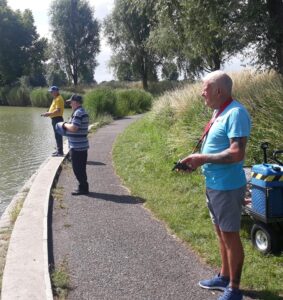 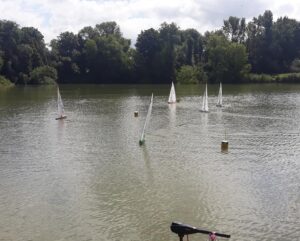 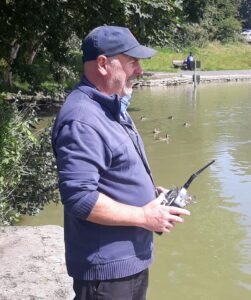 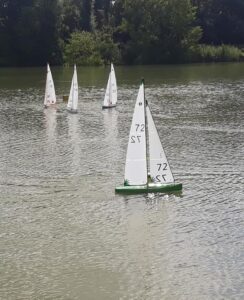 Spring Series round 1 (15th March) results (combined with Alice Trophy) > Rd1 IOM Spring Series 2020
This meeting was for the Alice Trophy as well as round 1 of the Spring Series – not that it felt much like spring as it was cold and wet – very wet! There was a light westerly breeze which came and went from time to time but the rain stayed pretty constant all morning. 7 skippers entered this one, that soon dropped to 6 as Graham had radio problems. We raced a triangle/sausage course with a gate at the leeward end and finish using the windward mark. This made for a nice long race with several opportunities to gain places and had it not been quite so wet it would have been very enjoyable.

Each skipper took it in turn to be the RO but after 7 races with the wind dying and everyone soaked through we agreed to call it quits. We didn’t know it at the time but the last race between Nigel, John and Richard would decide who won this round and the trophy.
Nigel won the race with John just ahead of Richard crossing the line. This result gave Nigel the trophy and round win scoring 9 points, with John and Richard tied on 10 but John takes 2nd place on count-back.

Well done Nigel, he gets to keep the Alice Trophy for another year.

Winter Series round 9 (23rd Feb) results > IOM Winter Series Rd9 & FINAL overall points table 2019-20
Having had to cancel the last round due to the storms it was nice to back out racing again and the conditions meant we really were racing!
There was a very strong westerly wind with an occasional gust, despite some large grey clouds it stayed dry all morning. Scott set a long triangle/sausage course with a gate at the leeward end and the finish at the windward end which made for a nice long race. We had 9 entries for this one, 8 of us decided from the start it was windy enough for our B rigs, while John W alone thought as this is Apex his A suit would be ok – he was wrong! After one race totally overpowered he was forced to switch down and so missed the 2nd race – his gamble had not paid off.

The strong winds stayed which allowed us to get through 14 races in good time. The usual suspects Bob, Richard and Nigel were out in front most of the time, in fact only those three won a race and they left quite a gap back to the rest of us mere mortals! In the end Bob nicked it winning this round with a score of 12, Richard was only 1 point behind on 11 with Nigel in 3rd place on 19.
Well done Bob on winning this round.