We had a decent southerly breeze for the annual Pursuit Race event, which is always a good thing for this event otherwise the various staggered fleets can run into each other before they get to the start line! I set a long oblong course of 4 markers with the start/finish in the middle which was raced for 2 laps.

Mike Lewis’s son Simon offered to be the meeting RO which meant all 10 skippers taking part could race with no need for anyone to come off the water each time. Everyone started together for Race 1 which is scored but also is used to decide who starts in which fleet for Race 2 when the Pursuit event really gets underway.

The Pursuit Race concept is all about “pursuing”, or being “pursued” by another group of boats which all have staggered starts. The boats were split into 3 fleets, for this event it was; A fleet (3 boats), B (4 boats) and C (3 boats). The A fleet starts first, followed 30 seconds later by B, then another 30 seconds the C fleet got underway. Which fleet your selected to start in is decided by where you finished in your previous race. For example; the first 3 to finish line in one race will be racing in C fleet (last group) in their next race. Likewise, if you finish in the bottom 3 you will be in A fleet for your next race and enjoy a head start along with 2 other boats. 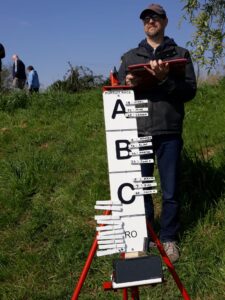 Cloths pegs with the skippers names and sail numbers clipped to board marked A, B and C was used to display who was in what fleet each time. This system seemed to worked very well, especially with Simon’s help. The strong breeze meant the 3 fleets usually managed to get clear away from each other at the starts.

Though the wind was fairly strong at times it was shifting all over the place especially when rounding the No1/windward marker. Many places were won and lost in just a fairly small part of the course. Most struggled to pick up the sudden wind shifts and “Apex holes” which appeared without warning! In the tricky conditions many skippers were moving up and down the fleets.

Through all 10 races no skipper won a race having start in C fleet but a few did get fairly close a few times. It was as important not to have too many poor results as there are no discards for this event. Finishing near the back means you have a big advantage for the next race but you had to make the most of it!

Kevin was racing my 2nd (No5) race boat as his one has developed lots of cracks and was leaking badly. He had a fairly long run staying in the B fleet and won the very last race. Mike and Howard also won a race each, myself and Alan won 2 each, while John picked up 3 wins. After the coffee break I had a good run of race results which as it turned out made all the difference.

Overall, this event went very well and I think was enjoyed by most taking part. As intended, it really mixes things up allowing all skippers a chance to be “out front” for a while.

My sincere thanks to Simon for being the RO which helped to make the meeting run very smoothly. 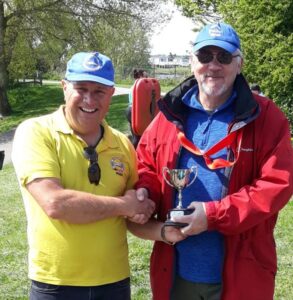 Russ (left) receiving the Pursuit Trophy from the Chairman Kevin