All reports & scores by Russ Chilcott 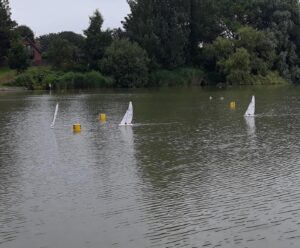 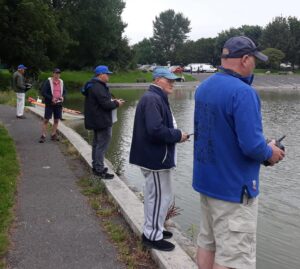 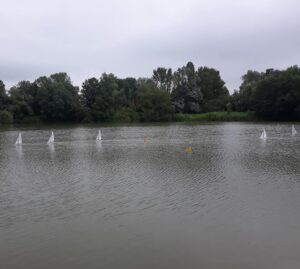 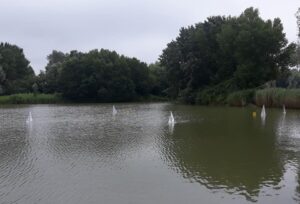 SYS Series round 3 Sun 25th July score sheet > SYS Rd3 2021 results
After the really hot spell it was nice to have some “normal” summer weather for round 3 of the series. There was a very light north breeze which swung around a lot and sadly dropped away completely for fairly long periods. Most of the time the boats were able to keep moving, it was just a matter of being in the right place at the right time and making the best of the odd “puff” when it came along!

An oblong course was set with the finish line up at the windward mark, 2 laps were run for all but the very last race. Skippers stood on the right-side bank with 1 or 2 off at a time as RO’s. Despite the lack of any consistent wind and a fairly long course we did manage to complete 7 races and it stayed dry!

A few of the regular skippers were away for this one but we still had a good turnout with 11 entries. 3 of these were new skippers joining in the SYS series for their very first time; Martyn Chappell, John Peacey and Terry Greenslade. It was a baptism of fire for them all in such tricky conditions (I think they enjoyed it?) but they were able to close the gap to the fleet as the morning went on. In fact, in the very last race Martyn nicked a 3rd place just ahead of John in 4th.

Everyone found the conditions tricky as the wind would suddenly disappear altogether at times; sometimes it seemed to do it just seconds before a race started and quite often as a group of boats approached the finish line – all very frustrating!

Me and Robert avoided the “Apex holes” better than most and ended up tied on 10 points (after a race discard) but I win this round on countback as I had 3 wins to Robert’s 2. Alan finished in 3rd on 11pts just a single point behind us. 4th to 6th was also tied this time with 3 skippers all on 18pts, on countback John (Woodman) takes 4th, with Rodney 5th and Mike 6th. Following the theme of tied scores two more skippers were tied for 7th and yet another two for 9th places! Countback sorted them out but only 1 single point separates 7th from 10th places.

Let’s hope for a little more wind for our next round on 22nd August – I feel we are owed some!

SYS Series round 2 Sun 27th June score sheet > SYS Rd2 2021 results
Despite some very dark clouds the forecast of rain thankfully never materialised and it stayed dry all morning. There was a fairly brisk breeze coming in across from the car park, so we sailed from the right-hand side racing twice around a long triangle shaped course with a gate at the leeward end – just to make it interesting!

A few skippers were away on “family duties” so we were down to just 7 for this one but that didn’t diminish from the racing which was a closely fought right to the finish line on many occasions.
In Race 9 Graham got away from the start line on a port tack and held the lead for 2 laps right to the finish. You could hear his sigh of relief as he crossed the line to take his first ever small yacht race win!

It was very competitive all morning, after 11 races 6 different skippers had won at least 1 race each. In the end and by just 1 point John came out the winner scoring 18 points (after 2 race discard), I was 2nd on 19 with Rob 3rd scoring 22. There is a little break now before we resume the series with round 3 on 25th July.

SYS Series round 1 Sun 30th May score sheet > SYS Rd1 2021 results
We had a northerly breeze which would at times suddenly switch around 180 degrees and back again which made the racing “interesting”! Even by Apex standards it was very peculiar as you’d find your boat suddenly changing tack all by itself and you could easily gain or loose a huge amount sometimes this happened just metres from the finishing line! There were 8 entries, I know under normal circumstances it would have been more but many were away to see their family/grand kids for the first time in a long while. The fleet of 8 dropped to 7 when Howard’s winch failed, the remaining skippers managed to complete 10 races by the 12pm finishing time. I got lucky more often than most and won it scoring 11 points, with Rodney taking 2nd place on 14 and John 3rd scoring 17.

We are back! From 17th May club competition meetings resume. The Small Yacht series starts on Sunday 30th May with a round once a month through to the end of November. There are also 2 one-off events taking place – see the 2021 Calendar page for full listings.

Restricted “free sailing” resumes under the rule of 6 but these are not point scoring meetings.

All boating competitions have been suspended due to the Covid 19 outbreak.

SYS round 2 Sunday 8th March 2020
results > SYS 2020 round 2
We had bright sunshine and a decent breeze to start round 2 of the series. A few of the regular skippers were absent, so we only had 11 skippers for this one. The course was set on the right side of the lake with a testing first leg into the breeze. The segregated start has certainly helped the RTR skippers allowing them to have their own class tussles without the worry of the MC fleet.

John (60) took a clear lead with him to coffee with Mike (22) close behind. In MC, Kevin (88) had a slender lead over Chris (43) with Russ (7) not far behind. This class has certainly been more competitive this year with no skipper dominating the fleet. Poor Alan (9) had another disaster with his boat with more mechanical problems.
During coffee, the course was moved completely to the ramp side of the lake as the breeze was now much stronger and had turned through 90 deg (much to my regret as it turned out)! John (60) continued to dominate the RTR and won the last 4 races. Kevin (88) just couldn’t get to grips with the starts after the course change and fell out of contention with Russ (7) squeezing past Chris (43). Then the wind increased dramatically, which caused the boats to be over-powered especially the MC fleet and the weather turned nasty (rain, bitterly cold wind & hail).
We ended race 9 and decided to end the round early. Well done to Russ and John, winners for this round.

The next meeting is on 12th April. The Sport Yacht Racing (SYR) district races for small yachts start at Warminster on the 29th March (register 9:30am). Details can be viewed on their website.

Round one of this year’s series did not disappoint, we had the weather, 15 skippers and the promise of some close racing. The course was set as a triangle with an extended last leg to the finish close to the ramp.

This year the two classes start at different times and judging from the fleet results, the new procedure seems to have worked, allowing for the RTR to have their own separate battle to the windward buoy.

Mike (22) in RTR, started really well winning three of the first four races. By coffee, he had a clear lead over the other skippers. Unfortunately for him, the course was moved 20m to a more central position and Mike failed to emulate his early results. The last few races belonged to John (60) who nudged ahead and then extended his lead. There was notably wins for Dave (28) & Robert (53). We also had a welcome return to racing for John Betty (181) and a new skipper Graham Small (B).

In MC, Russ was the skipper to beat and always seemed to be in the right place, he won all but two races. Kevin (88) had a consistent run of seconds. Alan (9) had mechanical problems and retired. Jan (184) and Tony (185) also made a welcome return to racing after a long break.

Well done to Russ and John for winning their class this time.

The next SYS meet is the Endurance race on Sunday 16th February 11:00am start.