We had a beautiful sunny and hot morning but unfortunately very little wind for this year’s event. I set a square course in the middle of the lake so at least one of the legs would be into what little wind there was.
10 skippers entered this event, Terry Greenslade was the time keeper and he assisted Donna McHutchion who was lap counting the race.

There was a brief increase in the breeze so with everyone on the water and ready to go we decided to start a few minutes early before it disappeared!

Newbie Martyn Chappell got away clear at the front and lead the fleet to the first marker, this turned out to be his short moment of glory as gradually slipped back through the fleet.
John Woodman followed closely by Daron Maynard and Nigel Clarke (Nigel; sailing my 2nd boat) got away on the first lap. Mike Lewis was clear in 4th place filling the gap back to the rest who were in fairly close formation but already half a lap down! After a few laps Daron had found all the “holes” and dropped back, leaving John ahead with Nigel normally not too far behind. Mike took up 3rd spot still all by himself.

It stayed that way for quite a while with the breeze dropping away leaving the boats to crawl along before picking up for very short periods. Graham Small had TX problems, but all credit to him as he brought his boat in, replaced both the TX and RX and rejoined the race – now that’s the spirit!

At the halfway point John and Nigel had lapped most of the fleet. Myself and then Alan Barnstable and Robert McHutchion caught up and passed Daron for 4th place and slowly started to catch Mike holding 3rd.

Meanwhile at the front Nigel took the lead very briefly from John but it didn’t last long as a small wind shift helped John to regain it back again. John gradually pulled away and after the full hour he won the race a good half a lap ahead of Nigel in 2nd place. Both skippers were the only ones to score 10 laps.

The race for 3rd place was very close; I finally got passed Mike and held it for a few laps but with 10 mins to go Robert and then Alan passed me (ERRR!). With the hour time up it was a race back around to the finish line to decide the remaining places. Alan could have/should have taken the place but slipped just inside the penultimate marker (not for the first time!) which proved to be very costly. In such light winds by the time he had re-rounded it several boats including Robert had passed him. Robert took advantage and went on to nick 3rd place (not that he knew it at the time!) by some distance. I finished 4th with Daron 5th, Alan recovered to take 6th and Mike 7th were all in fairly close company. We had all completed 9 laps.

Kevin Roberts finished a lap down in 8th place, just like Alan he had missed his share of markers during the race. Graham finished 9th on 6 laps with Martyn completing his first ever small yacht race in 10th having done 5 laps.

It is fair to say everyone was very pleased when it was over. We raced in bright sunshine, it was hot with no shade and with such light winds it was very frustrating at times – actually – for most of the very long hour!

Well done to John on winning this event.

A big thankyou to Donna and Terry for doing the lap counting duties. 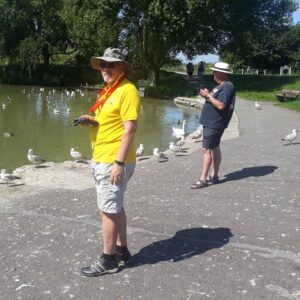 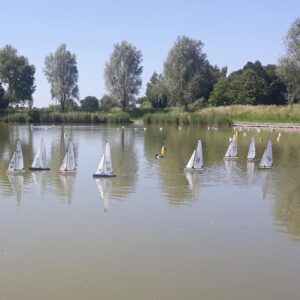 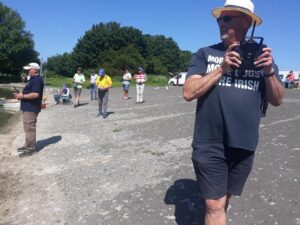 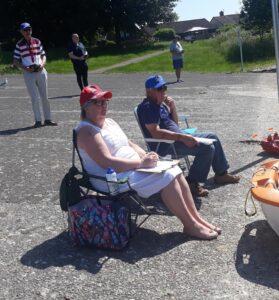 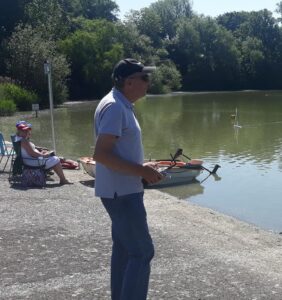 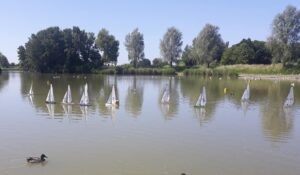 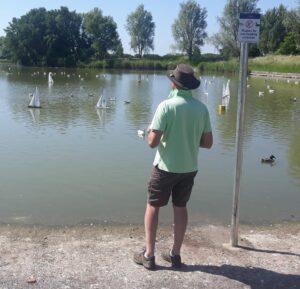 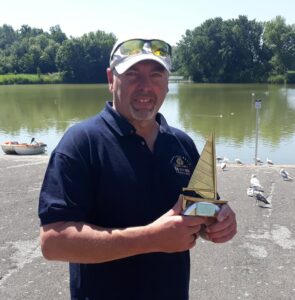