Report and results by Russ Chilcott

In recent years the “endurance” side of this event has been trying to stay focused and patience with very little wind to move the boats – this year we didn’t have that problem! The remains of Storm Eunice was still hanging around leaving us a strong south westerly wind around 30mph but gusting to well over 45mph at times!

9 Skippers had braved the forecast and entered the race. Fortunately, apart from a brief very light shower it stayed dry for the entire 1 hour long race.

I was the OOD and decided to set a long course running parallel to the west side so it was shadowed a little by the bank and trees along that side. This worked reasonably well avoiding the worst of the choppy waters and frequent gusts hitting the lake everywhere else. The No1 and No4 markers were place fairly close to the bank with the lap counting gate slight further out to provide two shortish windward legs. Getting around these two markers without having to do too many tacks could make up or lose a skipper quite some distance.

The race started with Daron and Rod being recalled for a “jump” start. John W got away nicely and took the lead, with myself closely behind. The rest were in fairly close company, some struggling at first to hold a decent tacking line in the very choppy conditions.

On his 2nd lap while running the long downward leg John’s boat was over-powered for a moment and it spun around, I passed him to take the lead. I had expected John to close the gap and retake the lead (cos that what he normally does!) but to my surprise I managed to stay ahead.

Mike RTD after his 3rd lap, his boat was ok but he found the choppy waters a little too much for him.

By the midway/30 minute point most skippers were getting to grips with things. A boat could easily be over-power on the far side of the course but then be left drifting for a short time around the nearside No1 marker!

I had gradually pulled away to gain a half lap lead over John and started to lap a few boats. Somehow, I had got my boat setup right on the sweet spot for the conditions and she seemed to be the quickest almost everywhere on the course!

John did a quick “pit stop” to retune his boat, this let Alan close the gap to him. Meanwhile Rod was holding onto 4th place with Daron (racing the Loan Boat) heading Graham and John P who were moving apart and then gaining on each other almost lap by lap. Newbie Tony was really struggling at times having hardly ever sailed in such windy weather but to his merit he stayed with it.

For the last 15 mins I had a comfortable ¾ of a lap lead but was still enjoying some good battles with Rod and Daron though they were actually 1 and 2 laps behind. Alan had finally caught John and they were having a good fight for 2nd place.

As the 1 hour time was up I was relieved to have won the race having completed 19 laps. Alan had won his battle with John and they finished 2nd and 3rd respectively on the same 19 lap score. Rod came in 4th just 1 lap behind (18 laps), with Daron in 5th (17 laps).
Graham and John P were both on 16 laps, but Graham crossed the line ahead to nick 6th place. Tony finished in 8th but he had completed the race and done 14 laps in very tough conditions.

My thanks to Diane (Tony’s wife) for doing the Lap Counting and timing. 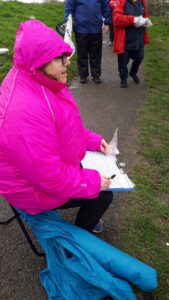 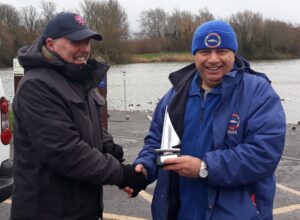